The following is a sample Factorial ANOVA Case Study. There are several key elements required in order to conduct a successful Factorial Analysis of Variance (ANOVA).

The first element is the assessment of the fulfilment of the required assumptions for Factorial ANOVA (normality and homogeneity of variances). Many software packages such SPSS provide appropriate tools for this task, but it is important to know what to do if the assumptions are not met.

Factorial ANOVA for Number of Colonies

The purpose of this analysis is to perform a Factorial ANOVA analysis in order to assess the effect of three independent variables (factors) which are Concentration, Cell Line and Drug on one dependent variable, which is Number of Colonies.

For the purpose of the analysis, a 4 x 2 x 3 Factorial ANOVA design will be used, with a sample size of N = 672. The following descriptive statistics are obtained: 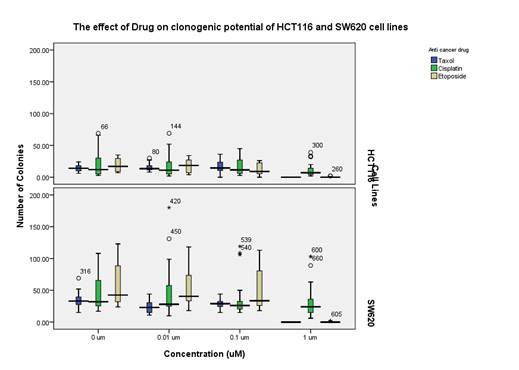 The Factorial ANOVA analysis is performed with the aid of the SPSS software package. The relevant outputs are shown below. 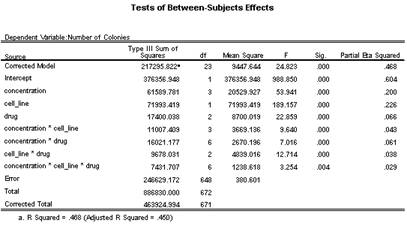 The ANOVA table above shows that all the interactions and all main factors are significant. In fact, the third order interaction Concentration*Cell Line*Drug is significant (F(6, 648) = 3.254, p = .004 < .05,

This indicates that all the factors affect significantly the DV, and the effect of each factor on the DV depends on the level of the other factors.

The following post-hoc results are obtained: 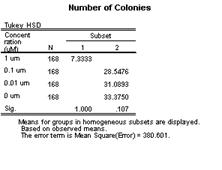 The best drug is Taxol, and the best concentration is 1 um.